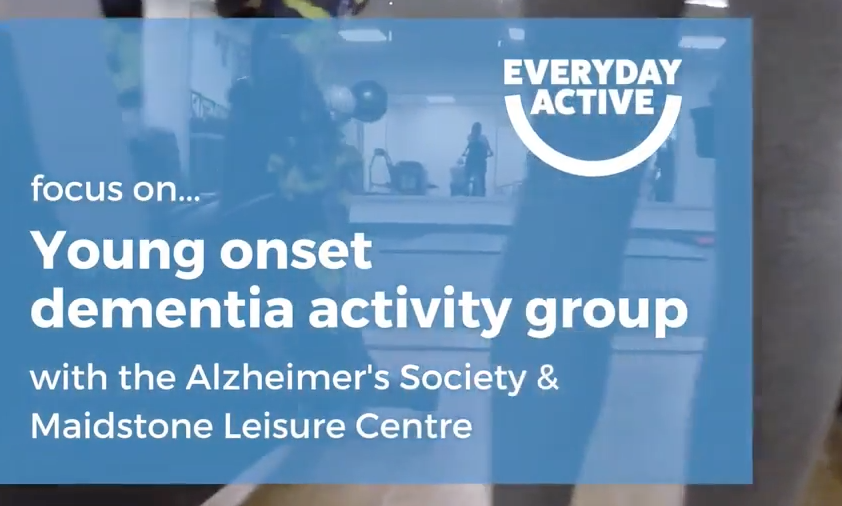 Alzheimer’s Society Kent and Medway had seen a sharp increase in the numbers of people under 65 who were using their services. People under 65 were coming through to the Dementia Support Service frustrated at the lack of specific provision for their age group.

It was decided that this group of service users would be ideal to work with in a co-productive way to see if the Alzheimer’s Society could mutually produce an age appropriate service/activity programme to meet their needs.

During the coproduction stages and through speaking with the group it became evident that physical activity and the opportunity to meet others experiencing young onset dementia were two key priorities for the group members.

There were a number of key stages involved in setting up and delivery of the programme:

1)    Workshops and consultationwith younger people with dementia and stakeholders were undertaken to discuss activity ideas and also to identify barriers, support needs and/or concerns. Carers and family members were also involved in the consultation sessions.

The activity sessions, which were not attended by Family members/Carers, were designed to allow time at the beginning for participants to settle in and always ended with refreshments when Family/Carers joined with the group.

4)    Dementia Friends awareness trainingwas provided for 60 staff at Maidstone leisure centre and activity deliverers. It became clear during the consultation sessions that the people living with young onset dementia wanted those who would be supporting their activities to understand the challenges that people with dementia might face. A member of staff from the Alzheimer’s Society also visited the Leisure Centre to make sure it was a dementia friendly environment, this included looking at things like accessibility, steps and signage.

5)     Promotion of the project and recruitment –The Alzheimer’s Society were already working with the Neurology clinic at Maidstone Hospital & the local Memory Clinic and therefore had direct contact with the target market and a route for referrals. The project was also advertised and promoted via social media channels.

6)     Delivery of the activity programme – Initially there was an activity trial / taster session so that people could try out the activities and see what they enjoyed doing.Activities included gym sessions, swimming, walking, table tennis, exercise classes, badminton, tennis, bowls, archery and rowing. Participants made a small contribution towards the activity costs for each session and the twice monthly sessions always included a choice of 2 different activities for participants.

Three short video clips have been produced demonstrating the benefits and impact that the sessions have had on participants and their families/carers:

The benefits and impact that the sessions have had is also demonstrated through feedback and comments received from participants and carers on a regular basis.

Feedback and comments from some of the participants:

“I feel very good coming here, I enjoy it. The girls who run it are absolutely wonderful. This gets me out of my house and gives my partner a break.”

“I think giving in is the wrong thing to do so I’m just keeping myself active.”

“It was very energetic and a lot of fun”

“It’s good being with other people with similar problems”

Dave who cares for his wife Karen, said “She gets more relaxed after she comes to the sessions, she enjoys coming to the sessions which is good for me and I meet people in a similar position to myself. We have a chat and go and have a coffee and it gives us an hour or two just to worry about ourselves rather than someone else.”

Vicki from Alzheimer’ssaid about the sessions, “Everyone is really enjoying it, it is really changing some of their lives, it’s making them more confident and realising that although they have dementia they are still able to do so much.”

-100% of the participants said they enjoyed the sessions and being part of the group.

-100% of participants agreed that they were well supported by staff and volunteers at the sessions.

-Attendance at the activities has remained constant with an average of 10 participants at each session.

-Selecting the right staff (naturally caring and with a compassionate ethos) has enabled the team to best meet the needs of people living with dementia.

- The co-production theme ran throughout the project. It is very much a client led group, so the group members decide which activities they would like to do.

- The project and activity sessions are to continue beyond the initial grant funding award and will be sustained by being volunteer led in future.