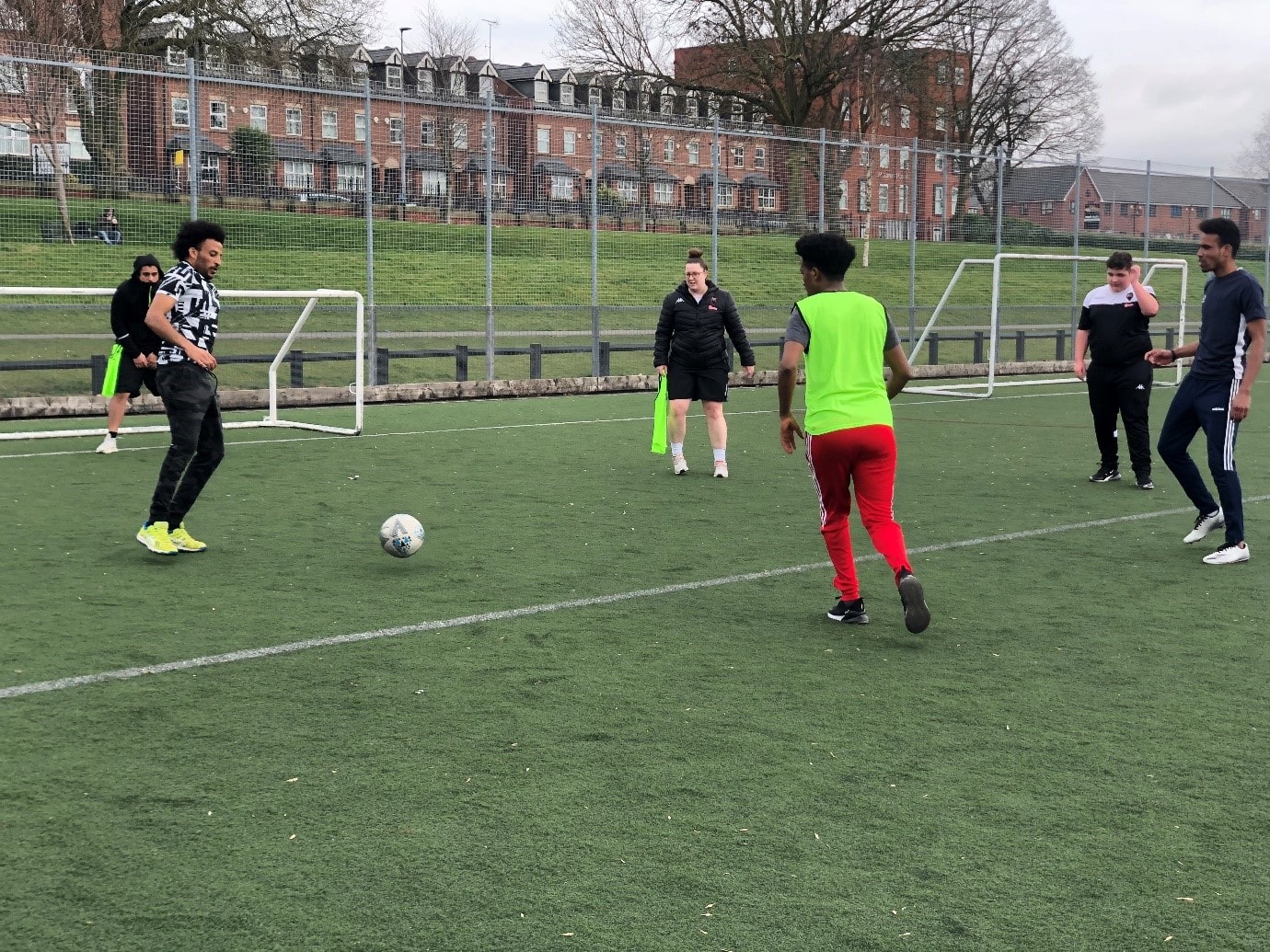 The London Marathon Charitable Trust (The Trust) has awarded a £600,000 grant to a project that aims to improve the health and wellbeing of young homeless people in North England and Scotland through the power of sport.

GreaterSport joined Active Partnerships across the North of England and Scotland to design a project that targets young people who are at risk of homelessness, to engage them in physical activity and movement. The project additionally has a mentoring programme attached to the physical activity, to encourage young people to learn, grow and develop new skills and enable change in their lives or situation.

Autonomy was given to regional Active Partnerships to design the project to suit the needs of their young people, with a holistic and place-based approach. GreaterSport recently created a post for a Young People Equality lead to encourage change in inclusivity and diversity in sport, both on the ground and across business partners. This project encourages GreaterSport to develop relationships with a diverse range of young people whose circumstance may lead to exclusion of physical activity and groups – its aim is to encourage the benefits found in movement and mentoring to those who need it the most.

The project was designed in Greater Manchester to find young people who live in alternative housing – such as care experienced young people – and listen to their voices, opinions and thoughts on physical activity, sport and movement.

Using data and insight, we identified the top boroughs in the GM region who have the highest levels of youth homelessness. After contacting youth workers/staff that work directly with young people, it was requested to consult and engage the young people to find out which sport or activity they would like to do, the barriers they feel there are and how we remove them to help they enjoy the project. Each consultation, in different boroughs, reflected a different idea and thirst for a variety of activity. We additionally asked the young people, which type of mentoring they would like and how help them co-design the project to suit their needs – to increase retention and participation.

The residential is ran by Barnardos, called BeU, and it houses LGBTQ+ young people (who have fled hostile and volatile households, or been kicked out due to their LGBTQ+ identity). Their consultation reflected the want to try gym and leisure centre activities such as court sports, swimming, gym equipment, walking and running.

Due to an existing volunteer relationship with The Running Charity, the BeU staff planned for weekly runs with the charity to encourage young people to learn about how to safely and effectively start jogging and running.

GreaterSport has an existing relationship with Bury Leisure, so we were able to communicate the barriers LGBTQ+ young people face when attending leisure facilities. Bury Leisure aims to ensure the safety and inclusivity of the young people by building a relationship between them and the fitness instructors and trainers. They have gender neutral toilets and existing inclusive measures to support LGBTQ+ people – including a zero tolerance policy and LGBTQ+ representation. The mentoring scheme attached to the project is reflective of the youth voice, it will focus on developmental training and skills, and mental health and well-being.

Using existing relationships with Wigan Councils Targeted Youth Support Service a plan was created to refer up to 20 young people from Social Care and Youth Justice (and their social workers) to engage them in consultation to encourage sport and physical activity. The consultation is on a one to one basis to grasp their voices without pressure. TYSS teamed up with pathway workers in Wigan Athletic Community Trust.

We have separated the project into two; Wigan and Leigh. This was to encourage longevity into sports clubs and groups that are in their community. Wigan Athletic Community Trust have the capacity to adapt their sessions to the voice of young people and work with wider community groups to encourage retention. Facilities such as Howe Bridge (Leigh) and Wigan Life Centre South will be welcoming young people to use their equipment, courts and ensure fees are covered for the young people. Wigan Athletic Community Trust have adapted their existing traineeship programme, to accommodate any young people from the programme who wish to develop skills in coaching and community work. TYSS will be leading on job skills and educational training to support any mentoring needs, including qualifications (AQAs), housing information (social housing, care leavers, associations), and C.V building and employability skills.

The borough of Manchester has existing and successful projects set up for homeless youth, but our project has a focus on young people seeing the benefit of physical and mental health. GreaterSport have teamed up with the Greater Manchester Bridges Outcomes Partnership, who offer an extensive pathway for young people at risk of homelessness. Their mentoring scheme offers alternative education, support and life skills. Due to our new partnership, their programme now offers sport and physical activity. The consultation is on a one to one basis via support and key workers who work with young people across Manchester, Salford and Bolton. There was a popular request for yoga, to encourage positive mental health and well-being in addition to beneficial movement. Street Games have teamed up with GMBOP to create a young person friendly yoga session, in a venue central to the young people. The consultation is a continuation during the mentoring and pathway project, so GreaterSport continues to work with GMBOP to cater for the wants and needs of the young people as and when they express their interest.

AKT had joined a GreaterSport conference to discuss LGBTQ+ provision and spoke passionately about their homeless young people, and the lack of support and provision available to them due to their circumstance. The conversations continued to see where GreaterSport could offer support for young people. AKT have staff who box and train in gyms at an amateur level, and is exploring with young people to see if they wish to join her to learn new skills in fitness, discipline and self-defence. The sports and movement element is gym based, training to box with an eventual goal to box in the ring. The mentoring element is certified courses in self-defence and fitness, we are currently looking at ways to give young people qualifications they need to continue boxing after this project to inspire them in this field of exercise.

Participant H is a 17-year-old male who has recently faced disadvantage and inequality due to leading what he himself described as "a chaotic and crazy lifestyle." H was used to staying at friends' houses and sofa surfing after falling out with his parent/s.

Despite H’s previous disengagement from activity, he has demonstrated commitment to improving his ability to lead a positive lifestyle which has been achieved through specialist mentoring and the advice, guidance and support provided through this programme.

He is now taking positive steps towards the development of a more positive and sustained lifestyle and reports that he now feels happier and more in control of his future.

The Young People Forward project is a new way of working for GreaterSport due to the nature of targeted work.

To encourage a whole system approach which removes barriers into sport and physical activity we are keen to support our workforce of partners and volunteers.

To enable change there is emphasis on professional development of staff, with the Bury and AKT projects, the young people have additional barriers around LGBTQ+ issues, therefore, learning and information must be shared to partners to end the stigma of LGBTQ+ in sport. LGBTQ+ barriers around changing rooms, pronouns, discrimination and prejudgement can discourage a young person from participating. BeU staff can offer training to sports and physical activity staff to remove potential risk - and in return sports and physical activity can share their learning of facilitating sport sessions to BeU staff. This enables workers to have professional development in diverse, new ways.

Sports and movement workers are also on a journey when working with vulnerable young people who have lived through adverse childhood experience (including instability, homelessness, youth justice, Home Office Status, low socio-economics); Young People Forward has demonstrated the need for inclusion and recognition of a young person’s circumstance when developing a programme. The workforce training and professional development should reflect learning around a young person’s life with full consideration of what they have overcome - when GreaterSport designed the Young People Forward programme for Greater Manchester we focussed on listening to their voices, co-designing WITH young people, FOR young people.

There has been encouragement for the sports and activity to be accessible, and the funding has been directed to paying for equipment and memberships, to allow young people to continue their new activity either as a group or individually.

Youth voice has been at the forefront of the planning, which has tailored the activities to allow for young people to try new things and feel confident develop skills and enjoyment in activities that have been inaccessible to them due to their circumstance.

There has been emphasis on mentoring having a lasting legacy for the young people, whether in their housing situation or with future employment and education. The partnerships with AQA and local certification providers will encourage young people to finish the project with a form of qualification, training or skill that they can keep for future ventures.

In Wigan and Leigh, there has been offers of a Traineeship for young people to join Wigan Athletic Community Trust after the project, to train as a sports coach and sports youth worker, opening a door of opportunity and inspiring a career path for young people. GM BOPs is offering a cooking course to not only give Care Leavers a necessary skill, but to inspire career choices in catering after the project. In Salford the mentoring is in collaboration with local housing associations to give access and information to the next steps of housing for care leavers, particularly refugee young people. They have also certified the programme in sports and leadership, to allow young people who arent allowed to enrol in formal education to build their C.V and skill set ready for the Home Office interviews and possible leave to remain status.

The project is due to end in October but plans are in place to continue the relationship between delivery staff and young people to allow young people to keep access to local provisions, we have maintained a place based approach to support young people to know what is in their area, and how to access them. We have allowed young people to have ownership of equipment to continue sports and movement, to continuing to have a place within the Greater Manchester Moving culture. Some boroughs are planning an end of project awards night and celebration to thank young people, and celebrate their achievements in the project, including participation and leadership with in the groups.