Made By Sport to champion grassroots sport and sets £40M target 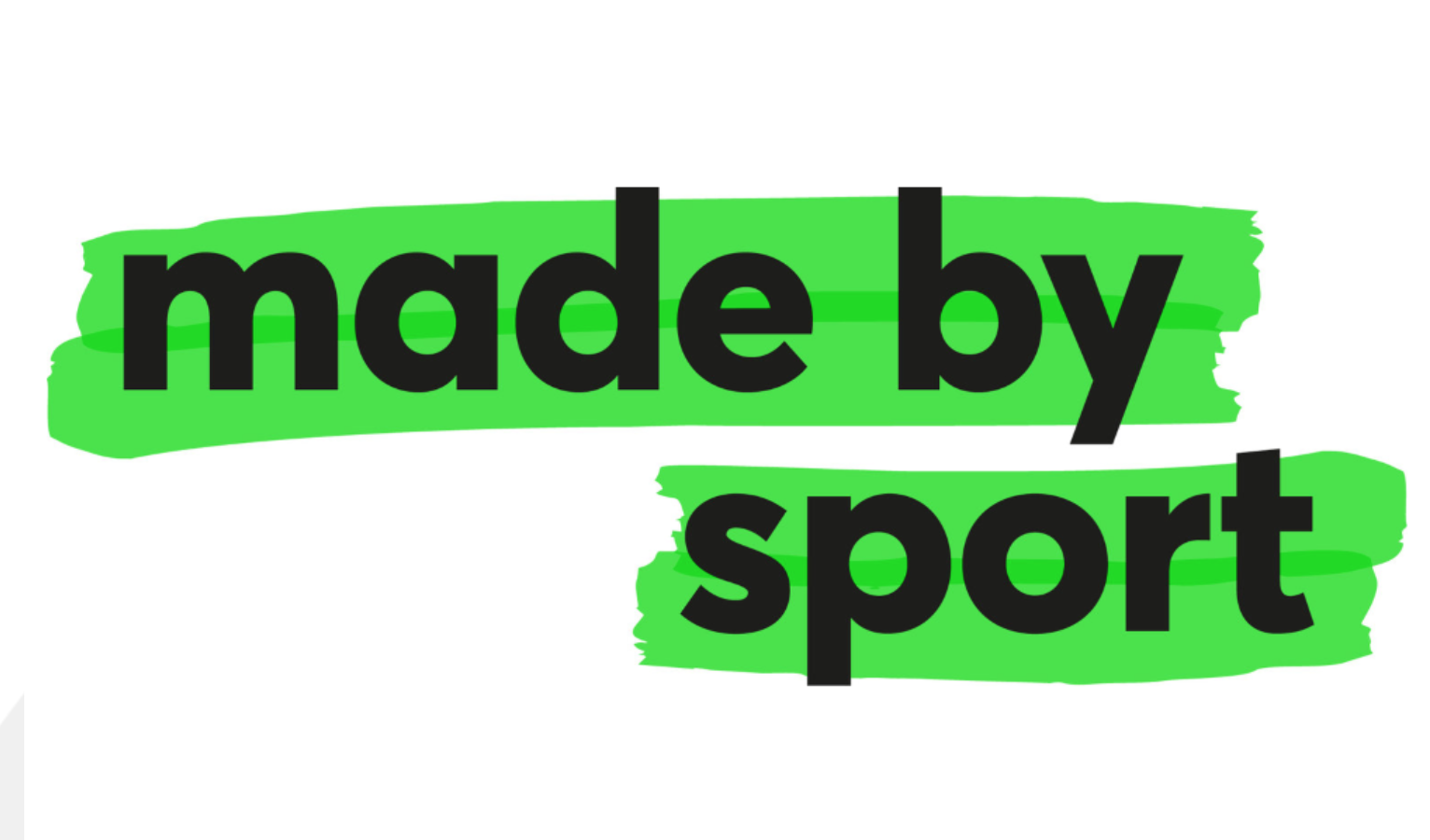 - Anthony Joshua and Nicola Adams to launch campaign with the aim of championing the powerful role of sport to build better futures for young people, which will also be attended by The Duke of Sussex

- Campaign believes that sport can play a pivotal role in how young people develop - building skills that make a difference at school, at work and in life -

Professional boxing duo Anthony Joshua and Nicola Adams will join forces to launch Made By Sport, a new campaign set up to champion grassroots sport in the UK.

Professional boxing duo Anthony Joshua and Nicola Adams joined forces to launch the campaign on the 12 June. The Duke of Sussex, who has seen how sport can positively impact people’s mental fitness and the role this has played in helping change young people’s lives, attended the event.

The campaign has been created in the proven belief that sport can play a pivotal role in how young people develop - getting them off the street and building skills that can make a difference at school, at work and in life.

With young people from poorer backgrounds approximately 50% less likelyto play regular sport, Made By Sport will create a four year campaign that will champion the power of sport to change lives and sets out to raise £40m in funds to use sport to support young people from disadvantaged communities across the UK. It will be the largest fundraising campaign ever undertaken for grassroots sport in the UK.

The campaign will be delivered in collaboration with the Sport For Development Coalition, made up of over 60 existing charitable organisations with a reach into thousands of schools and community clubs across the UK. Made By Sport will be Chaired by Justin King CBE and supported by high profile figures from inside and outside sport.

“We are delighted to be supporting this major new campaign that will raise awareness and funding for what we know and are so passionate about - the transformative effect sport can have for people and communities.

Sport has been a huge part of my life, and I want to help everyone, particularly those that can benefit most, to have the same opportunities.

Importantly Made By Sport is working collaboratively with the Sport for Development Coalition to ensure the involvement of the many charities, including Active Partnerships, that use sport to achieve social change.  I am delighted to have been appointed as one of the Coalition representatives on the Made By Sport Board and look forward to helping make this ambitious new venture the great success it can be.

Justin King CBE, Chair of Made By Sport, said:

“Sport has the power to change lives. It can teach us skills that last a lifetime and - in a world where local sports is under increasing pressure, where it’s easier to play on your phone than in a park and where joining gangs can be more glamorous than joining teams - we believe it can play a pivotal role in how young people develop.”

“Today marks the start of a crucial four-year journey for Made By Sport that will see the campaign champion community sports and raise much needed funds to support it across the UK.”

Alongside Anthony Joshua and Nicola Adams other British sporting stars will also lend their support to the campaign having witnessed first-hand the transformative effect sport can have on the lives of young people. The Duke of Sussex regularly supports projects that enable children and young people to build their skills and confidence and wants to use his position to ensure that community sports groups continue to play a key role in improving the life chances of disadvantaged young people.

“Sport to me is more than competing. It is about the discipline and regiment it teaches you. The lifestyle of an athlete can be taken into any walk of life. It’s about how you can improve yourself as an individual through the power of sport.”

“Boxing has helped me — instead of hanging round on the streets, I was in the gym, learning something new, going to different gyms, different cities around the world. It gave me confidence, and taught me discipline, teamwork, and a lot of important life lessons. It shows how much sport can change your life.”

Made By Sport now begins a four-year campaign to raise £40m in funds from a combination of corporate partnerships and public fundraising initiatives. This will include a collaboration with Great Run, the UK’s largest mass participation running programme, spanning all their events. Made By Sport will become an integral part of the 40th Great North Run in 2020, celebrating not just an important milestone for the world’s biggest half marathon, but also the UK’s proud history of fundraising through sport.

Made By Sport also announced Richemont as a founding corporate supporter for the campaign. Richemont's partnership builds on two decades of using sport to change lives in communities across the globe.

Sport England has today also confirmed its intention to work with Made By Sport to support its fundraising ambition by exploringa funding process that would see funds raised by the campaign up to an agreed level matched with National Lottery funding and made available to organisations focused on using sport for social change.

“Sport is a powerful force for good that can change people and places for the better. We believe that everyone should have the right to experience and benefit from sport, yet the sad reality is that deep inequalities prevail which mean these benefits are not equally shared. Made by Sport is a big, bold new idea that has the potential to challenge perceptions and change many thousands of young lives for the better. We fully support the ambition of the campaign to shine a vital spotlight on sport as a driver of social change and hopefully raise much needed funds for the unsung charities in this sector. As a major strategic investor in the sport for development sector, through our National Lottery funding, we look forward to exploring with them how Sport England can play our part.”

“We should never underestimate the importance of being active. Sport builds confidence, teaches vital life skills and can set young people on the path to success.

“This exciting campaign will champion the important role of grassroots sport and its ability to transform lives.”

“The Sport for Development Coalition is delighted to be working in partnership with Made by Sport. The visibility, increased understanding and investment that Made by Sport will provide will strengthen sport for development charities working in communities across the UK and transform the way the nation thinks about the power of sport to change lives for those in most need”

About Made by Sport 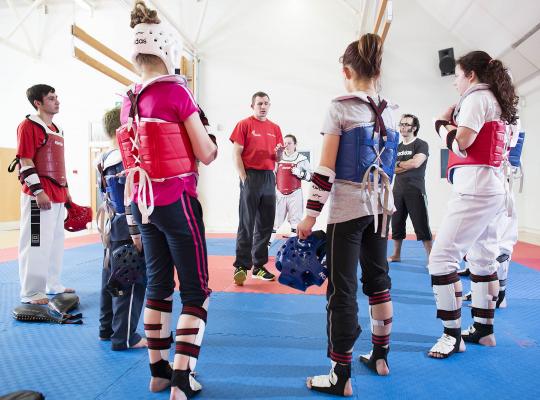 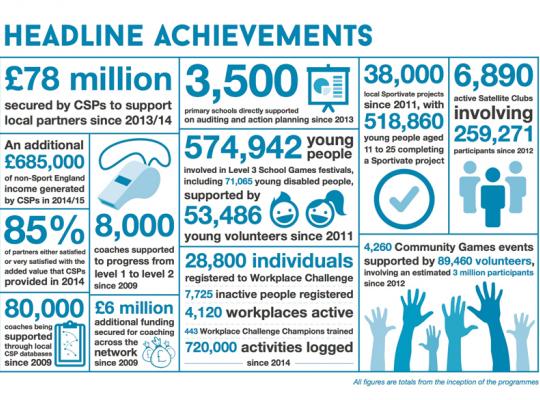 The CSP Network is delighted to publish its 2015 Impact Report.